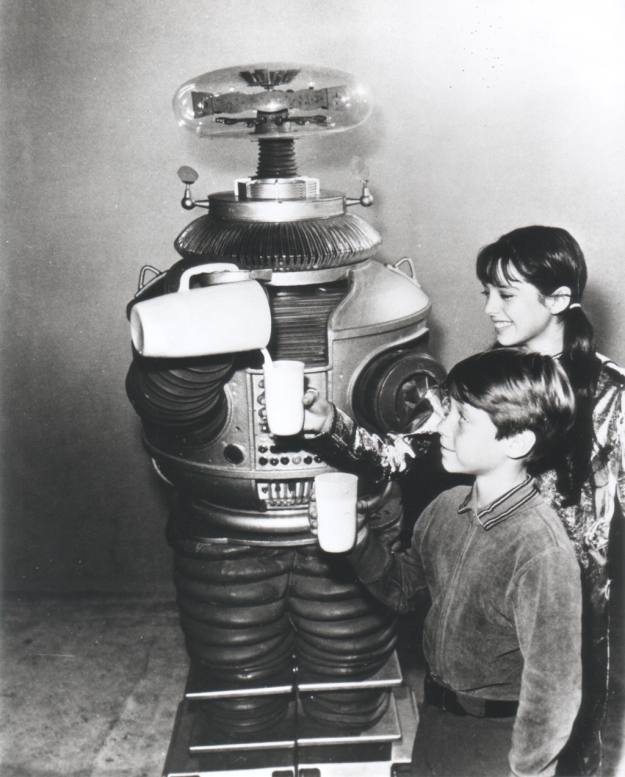 OK, I know this version of Lost in Space wasn’t actually a movie, it was a television series . . . but it sits rather nicely in my collection, and there is some interesting connected trivia to read below. The show ran for three seasons, with 83 episodes in total, between 1965 and 1968. Here we see the robot, who was the star of the show for me, with young actors Angela Cartwright (as Penny Robinson) and Billy Mumy (as Will Robinson).

Angela Cartwright was born in Altrincham, Cheshire, England in 1956. She is perhaps best known as a child actress for her role as Brigitta Von Trapp in the film The Sound of Music (1965).

In 1998, Angela made a cameo appearance as a Reporter (number two) in the film Lost in Space. She still works as an actress today, alongside her successful career as a photographer. Official website.

Billy Mumy, known as Bill today, was born in the USA in 1954. He works as an actor, voice over artist and musician.

He occasionally still goes into space, and doesn’t get lost any more. For example, from 1994 to 1998 he appeared as Lennier in the TV series Babylon 5, and in 1998 he played the part of Kellin in Star Trek: Deep Space Nine. Official website.

Angela and Bill have been working on a book together which will be out soon, entitled Lost (And Found) in Space, which includes 200 pages of personal remembrances of their years filming the series, and is packed with rare and never before seen photographs. Book website.

There will be a 50th anniversary reunion for four of the Lost in Space stars on 23rd to 25th October, 2015 at Chiller Theatre. Official website.

Lois January (above with robot friend) was born in Texas in 1912. Her mini biography can be read here on IMDB. Despite the appearance of the above photograph, she was actually uncredited in this production – The Vanishing Shadow (1934) – in which she appears with the robot. Lois played the part of a Secretary to one of the main characters. Interestingly, Lee J. Cobb had his first part in The Vanishing Shadow, also uncredited, appearing as a Roadwork Foreman.

A still frame from episode one

The Vanishing Shadow was a 12-episode serial. The robot in the photograph appears in the first episode (right), and I believe that the entire serial can be viewed on YouTube (episode one appears at the foot of this Blog entry).

At least two more publicity photographs of Lois January from The Vanishing Shadow are available for collectors to find, and eBay is a good starting point. 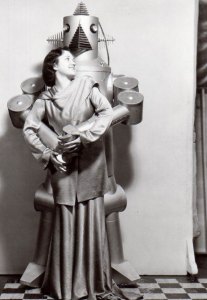 Lois January’s other roles include that of a manicurist (uncredited) in The Wizard of Oz, heroine of several Western films, and an actress who appeared in many well known American TV series from the 1950s to the 1970s. She died in 2006 at the age of 93. 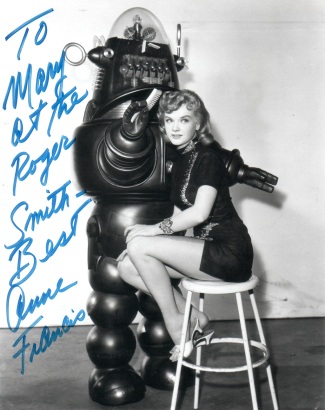 An interesting and fairly inexpensive collection can be made by purchasing photographs produced by film companies to advertise their movies. I have purchased a few photos on eBay, but I think that most of mine are modern photographs copied from the originals, or printed recently from the original negatives. You have to be careful not to buy modern images which have been printed from scanned computer files because the quality will not be as good as real photographs processed onto photographic paper.

A more expensive collecting area is signed photographs such as the one shown here. Robby, from the movie Forbidden Planet (1956), one of the most famous of the big screen robots, is shown here with Anne Francis (who seems to always be described as “leggy”, and for good reason!).

PRICES
There are a large number of signed photographs of Miss Francis as you will find if you search online, and the price varies enormously. In the lower region, about $10 plus delivery, but you can find signed photos for as high as US$900 – for example, try searching here. Perhaps the signatures are easy to forge, so be careful not to pay too much if you are unsure.

My photograph is signed “To Mary at the Roger Smith – Best Anne Francis”, and the handwriting appears to be the same as in other signed photos found online (see gallery below). I realise that this is certainly no guarantee of authenticity, but my purchase price was low – it was a lucky eBay purchase of less than US$10 plus delivery from the USA. The photographic paper itself appears to be old (it could well be 60 years old) and has text printed on the back in a repeating pattern which says “THIS PAPER MANUFACTURED BY KODAK”.

Below is a selection of other signed photographs that I found while searching online.

Signed with her character name from the film Forbidden Planet

Also signed for Robby (or Robbie as written here)

Similar to my photo

Just her name on this one. This is not a photograph, but a printed “lobby card” produced in the UK. For some strange reason the image has been flipped.

While searching I also found this very odd photo. Is that a real Budgie on her earring?

What better way to end than with the trailer to Forbidden Planet?